“Centuries ago, the Spaniards aboard their galleons to Manila Bay noticed the form of a giant parrot, perched in the forested mountains in Cavite. They named it “Pico de Loro” – “Parrot’s Peak”. Today, mountaineers who visit Pico de Loro discover that it is as enchanting as its name. High on Cavite’s highest point, they could behold the rocky tower that the Spanish sailors once saw as the parrot’s beak, and they could gaze towards South China Sea where the galleons once sailed, all the way to the historic island fort of Corregidor. Gusts of sea breeze reach the peak, refreshing hikers after a four-hour climb. The peak’s rocky outcropping is dramatic, and sharply contrasts with the plains of Cavite and the waters of South China Sea. Mount Pico de Loro stands 664 meters above sea level” (pinoymountaineer.com).

Funny how a stupid mistake can steal good notes whenever I reminisce our climb to Mount Pico de Loro. This is the second edition of my climb preparation gone bad stories since “The Coffee Adventure at Mount Manabu”.

Before I went to bed on the night of November 28, 2010, I thought I already packed all the gears and other stuff I needed for our day hike to Pico de Loro: digicam, protein-rich trail food (biko), toiletries, towels, extra clothes, headlamp (in case we can’t make it to the mountain’s foot by sunset), water, and jungle knife. Until, I took my first shot at the saddle. What I saw after was a warning that says, “insufficient memory”.

There goes my top note on this climb. If battery was the villain during my climb to Mount Manabu, Memory Card is for this one. With that, I only had a piece of Mount Pico de Loro. I was still lucky because that only photo perfectly showed what Pico de Loro literally means: Parrot’s Peak. Everything happens for a reason. At that moment, I equated that single photo as the reason. It’s the experience anyway that counts not the number of pictures you can capture. Somehow, it became the antidote for my disappointment considering that I captured the famous parrot’s peak with just one shot.

The second is, I was able to prove again that I can talk to animals just like when I persuaded the birds at Manila Zoo to give decent poses with me.

The cause of the boo boo story may have stolen the top spot nonetheless my close encounter with my kindred spirit, a damsel, is equally noteworthy. The story began when one of my hiking buddies (HBs) Master Paul tried hard to capture that creature on a particular view but to no avail. I helped him by communing with the damsels that may one of them grant our request to have a photograph with even just one of them. So I positioned my index finger near their crowd as I was pronouncing my mantra which is to have one of the damsels pose with me. Thanks to the gift because a minute after, a damsel landed perfectly on my index finger just as I wished! She liked the idea too I must say. There goes the lame reason for using the word “kindred spirit”. 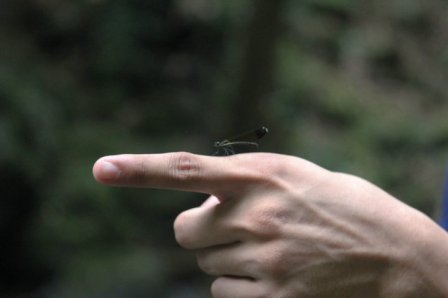 Third is the wind at the peak was very strong that it can literally blow one away like a paper should you be reckless at keeping your balance. That’s how we felt each time the mighty wind gives a major, major blow. I believe that strong winds give a stronger dose because I felt mightier after filling up my lungs with that element.

Fourth is I met two new faces namely Carl and Marco who are both novices to hiking. What’s interesting about them is their undying humor that undoubtedly propelled our tired bodies each time they inject it to our “take five”.

Fifth is I came across the word, clambering, while looking for 4-wheel drive’s (a mountaineer’s term) synonym. 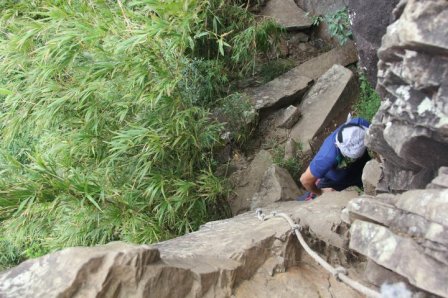 Sixth is I was almost convinced to adopt a baby snake when one of the locals offered it to me. I would have wanted to but the “position” I’m currently at wouldn’t be conducive for the cute animal.

Seventh is the “hungry” waterfall we found somewhere in the piedmont of the giant.

Last is this climb gave me one of my most favorite back pose courtesy of Ma’am Ron Hubsch. Thank you! 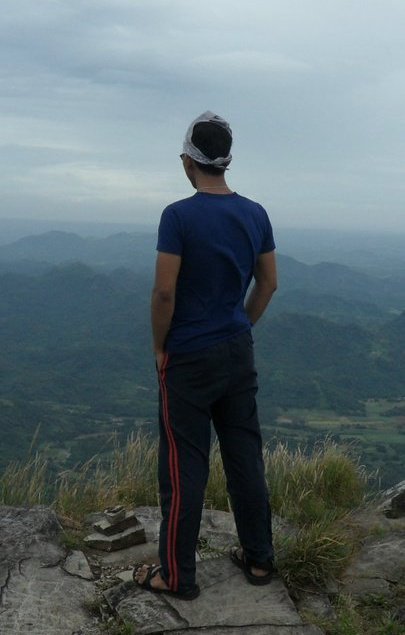 On Top of the Rockies

Lunch At the Summit

On Our Way Up 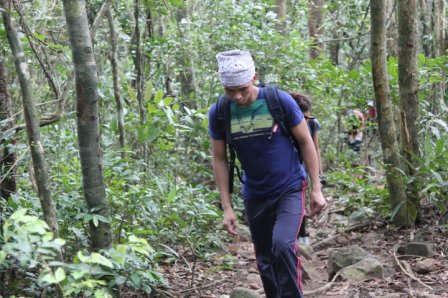 For more information (how to get to the place, climbing notes, trivia, more stories, etc.), click this website: pinoymountaineer.com.