“Countless legends surround Mt. Cristobal. With its summit taking on a characteristic ‘W’ shape, like that of stealth bomber, it is flanked by the grander Mt. Banahaw to its northeast, and together, they figure prominently in folklore. For instance, it is said that while Mt. Banahaw is a holy mountain, Mt. Cristobal is the Devil‘s mountain, and the two mountains possess good and evil energies that cancel out. The primeval forests of Cristobal, decked with ferns and thorny plants, culminating in its ancient crater, seem to fit the bill of an eerie mountain. Furthermore, there are tales of voices or apparitions, such as the creature called ‘Tumao’, waylaying mountain climbers; many hiking groups have their own “ghost stories” to tell. Even locals believe these stories; some guides say they have amulets to counteract the negative energy” (pinoymountaineer.com).

1. It’s actually ironic that despite the stories I heard and read, I didn’t feel even a scintilla of eeriness the entire time that we were there ascending from the foot and descending from the head of the mountain. In fact, the first thing that I can recollect whenever I hear Mount Cristobal is its abundance. Abundance in life forms as it boasts an array of flora and fauna in its halcyon surroundings. No wonder I was so ravished by this mountain each time I see the pictures I took from it notwistanding the fact that I didn’t capture any of the reptile species (bubuli and balikakas) and the well-known civet cats (the animus and the musang) inhabiting the deeper parts. In reality, capturing said reptiles requires a super camera so grant me an excuse for failing to show them here.

Going back to the stories on the background, I can guarantee that they’re just but folklore and there’s no reason to fear this beautiful mountain. 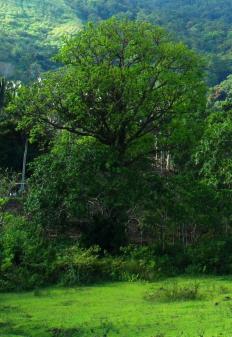 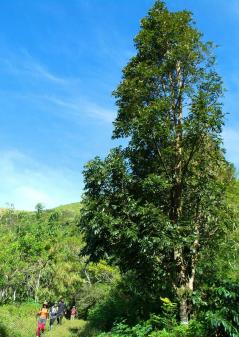 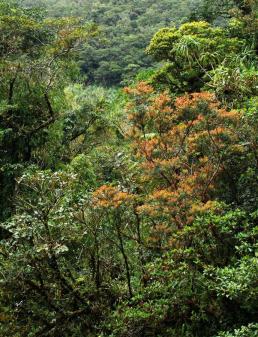 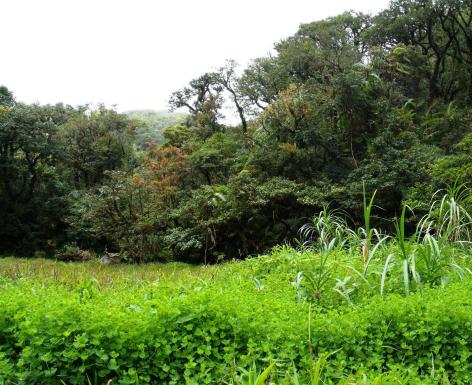 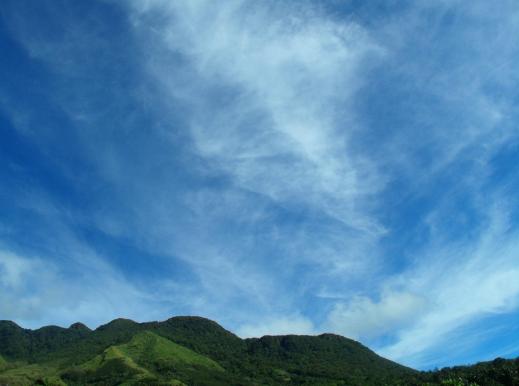 2. Because of Mount Cristobal, I found this beautiful plant bearing this flower or fruit, whose name is still unidentified to date. I actually posted it on this blog last April 6 of the current year hoping for some experts to shed light on whether or not this is a flower or a fruit. And, of course, to have the name of this subject plant identified. 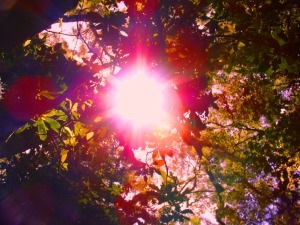 In the meantime, I called it Pearls of the Orient Seas because those four fruits or petals resemble to pearls. 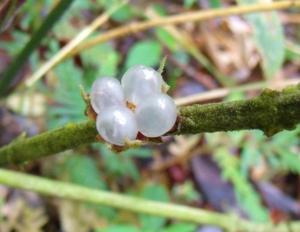 3. Poop is beautiful! I learned that because of civet cats’ dookie that are visible on the trails. These morsel of undigested coffee beans is actually a hot stuff for the locals that they covet for it. That’s for sure is an exaggeration but here’s a fact according to the author of pinoymountaineer.com: These excreted beans that litter one of the cleanest mountain trails in the country, are a sought after delicacy, fetching thousands per kilo in Europe. The cats’ acute sense of smell enables them to select the best coffee beans. Hence, the beautiful dookie.

4. Because of this mountain, I learned how to use the macro mode of my camera. I am proud to present my masterpiece: the edible sampinit (wild raspberry).

5. After a visit to this overrated talon (waterfalls) found at the foot of Mount Banahaw, I concluded that there might be a mistake for regarding the opposite mountain of Mount Cristobal, Mount Banahaw, as the Holy Mountain. The waterfalls, which I was expecting to lure my eyes turned out to be unattractive at all. (My apologies for saying that.) 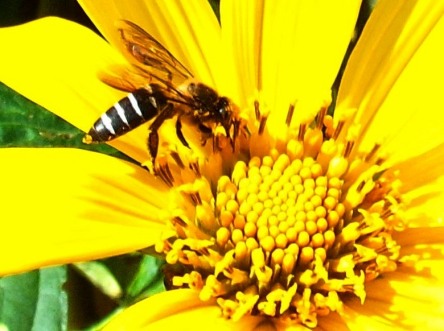 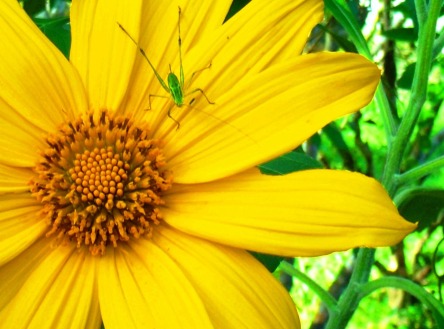 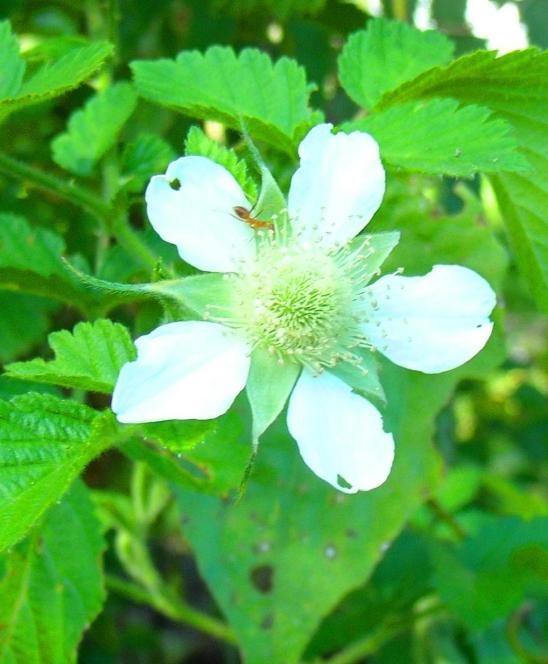 The numerous pieces of cult symbols carved or hanging on the caves as well as humungus stones at the foot of this Holy Mountain visible on our way to that waterfalls speak for my claim. I am not an expert in paranormal stuff but negative energy is what I smelled therein. Unfortunately, I already ran out of battery by the time we reached the part I am describing so I got no pictures to show. That’s what I thought until I visited Master Paul’s Facebook page. The latter explains the pictures that will support this note. 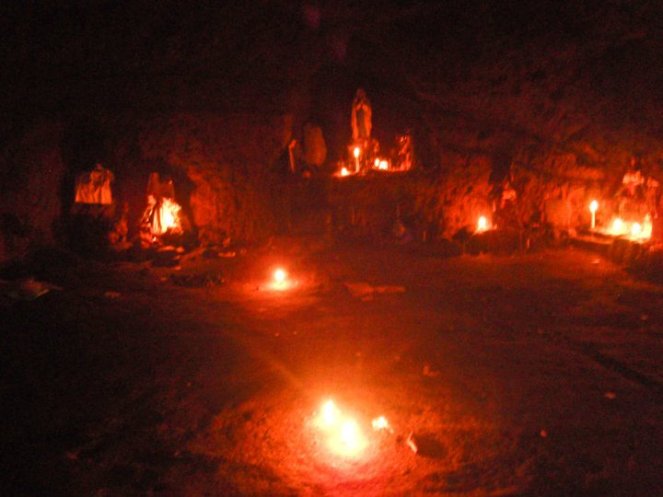 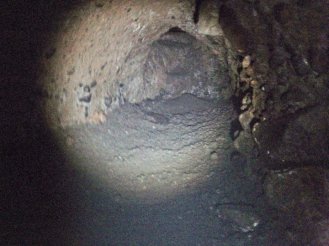 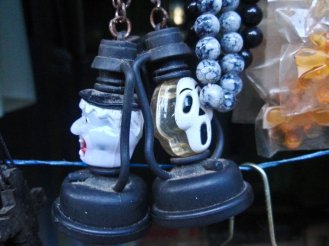 Well, I hope Mount Banahaw will be opened to the public again anytime soon as is it still closed when we were there. I need to get a feel of what’s lurking at the summit.

6. This is climb paved the way for my ultimate and sexy climbing partner to be featured. Her name is Maggie Q.

The Crew At the Summit

For more information (how to get to the place, climbing notes, trivia, more stories, etc.) about this abundant mountain, visit this website: pinoymountaineer.com.

PS: GE X5 and Some Photos by Mr. Paul Basco