Caveat: The purpose of this series is neither to proclaim myself as a grammarian nor to despise people who are still unfamiliar with common grammar mistakes. It is to serve as a reminder that there are rules in English that refute those mistakes. I am well aware that I still have a lot to learn in English and I will not stop digging those rules to share them here. If you happen to be a guilty party, please remember that I shared these blog posts in the spirit of constructive criticism.

Grammar pet peeves such as cope up, mails, masteral, return back, with regards to, attached (as a noun), fill up (as a verb phrase for supplying the missing information on forms), and “Hi gentlemen, or Hello, Youh,” (as salutations), that are commonly used in the workplace have been discussed in my previous posts. This time around, there is one grammar pet peeve (i.e., Thanks God) that has been shaking my Facebook newsfeed lately. Hence, the blabbermouth was once again compelled to correct the misapprehension. 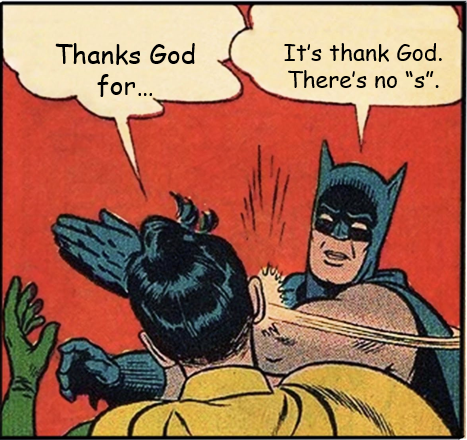 “Thank God” has been existing in the realms of English Language from time extending back beyond my memory and so its nonstandard counterpart, “Thanks God”. With social media in the way, the latter as well as so many other grammar pet peeves could not be more visible than ever. The bad thing is, those who are part of the so-called Gen Z, at least in my country, continue to be persuaded by the impetuous spread of nonstandard English. As a result, their collective English proficiency is sliding. This statement is supported by the continuing dominance of Malaysia in the English Language Proficiency Level in the Entire Asian Region (as of 06 November 2013) amid the fact that we are still the country to beat in Business English as of April 2012. I also have a clear picture of how the Gen Z use the universal language in the most challenging way when I was in the academe almost two years ago.

Up until now, it feels demurring to correct a colleague, even students, straightly. Thank God social media, through WordPress, is here to assertively offer a helping hand in reaching out to the concerned. I would like to reiterate that doing this is not a way of blowing my horn. I pride myself on my knowledge of the English language but I still have a million things to learn about its rules too. Grammar mishaps like bad diction of yours truly are also everywhere. Sometimes I could see them, sometimes I could not. I also need a helping hand.

Anyway, let us now exscind the idiom under dispute: “Thanks God”. The presence of such on Facebook, even on Twitter and Instagram, worries me much already as the younger Gen Z are all over the place. Guilty party, please do not clench your fist yet. Read on and make a note of this instead.

Relative to the foregoing, “Thanks God” becomes correct if it is used in the same context as in, “Thanks, God..” This way, it is a sentence–which implies that you are either praying or directly conversing with God–the very case in a direct address. And, it should be punctuated.

However, “Thanks God” is grammatically unacceptable when used as an idiom for being thankful that something good happened in a bad situation or if you are relieved of something (e.g., Thanks God the weather is fine today.)—which is definitely and often the case we come across on various social networking sites most especially Facebook. So stop saying “Thanks God” when you want to express relief or thankfulness. “Thank God” is the correct expression to use as in, “Thank God the weather is fine today.”

Let us have a little detour into the etymology of the idiom.

“Thank God” is a shortened version of “Thanks be to God.” or “I (we) thank God.” which means you are telling others that you are thankful to God. In the same way, people would say, “Praise God!“, “Thank goodness!” or “Thank heavens!“

All right. Do not be hornswoggled the next time around. What you just need to do is remove the “s” from the word “Thanks” to make it grammatically correct. I would thank God if you succumb.