Three weeks ago, my friends and I were invited to spend Eid break in the Eastern part of the Kingdom of Saudi Arabia and the threshold of Bahrain. The off the cuff ride down east—back and forth—is seriously irresistible. Everyone then had gathered in the early morning of Friday, October 3. Actually, the original plan was to go there by train but tickets already ran out by the time we were booking for ours.

When we left the chief city, the morning light was heralding another cool day and the images of the touristy Dammam and Al Khobar, with their inviting corniche, made us feel great happiness and optimism. We drove in convoy because we believe it is more fun and safer.

There was a multitude of holidaymakers packed in private cars on both sides of the road. In my book, the holidaymakers—both Saudis and expatriates—in those cars were off to Al Khobar and Dammam just like us.

Driving to the Eastern Region was a real adventure. The highway’s three lanes in each direction are heavily used by trucks. We had to watch not only the traffic in front of us but that behind us as well because cars would come up suddenly and pass us—when we were in the fast lane—on the left shoulder. Each time that happens, it feels as if we will faint.

Along the way, we enjoyed watching the changing desert colors and snapping photos of the scenery. The electric lines from pylons bring modernity across the far-flung regions of the Kingdom. What was most surprising is seeing a ferries wheel in the desert. Fun rides like this instantly bring about absolute mirth not only in children but adults like us.

After about five hours, we finally reached our friend’s house in Al Khobar City. Our arrival was in time for lunch so we had our sacs filled up by partaking in the sumptuous foods on the table right away. What ensued was we talked about eating halo-halo at Al Ramaniya Mall, going to Corniche for a breath of fresh air, setting foot on the Bahrain Border, and taking photos of Saudi and Bahrain’s tower.

When the clock formed 3:00 PM, we drove to Al Ramaniya Mall for a refreshment—a treat  courtesy of Chito. What was really flabbergasting during this, I may say, detour is seeing Filipinos in full force. It made us all feel so literally close to home. I had never seen a mall here that is so packed with Filipinos until that day.

After the table chitchats, we went back to the house to do a different kind of refreshment. This time, we will have ourselves lulled by the ocean waves’ sounds and sea’s fresh air at the rooftop. But before that, we ambled over to watch the vastness of the ocean in the distance and, at the same time, breathe the floating clean air. We also espied the grandeur of the cyclopean mosque in front and the palm trees oscillating in the intermittent wind all from the same vantage point. We were such gadabouts during that time.

Research shows that the sound of waves alters wave patterns in the brain lulling us into a deeply relaxed state. Relaxing in this way can help rejuvenate the mind and body. Sea air, on the other hand, is charged with healthy negative ions that accelerate our ability to absorb oxygen. “Negative ions also balance levels of seratonin, a body chemical linked with mood and stress” (The Health Benefits of the Sea). 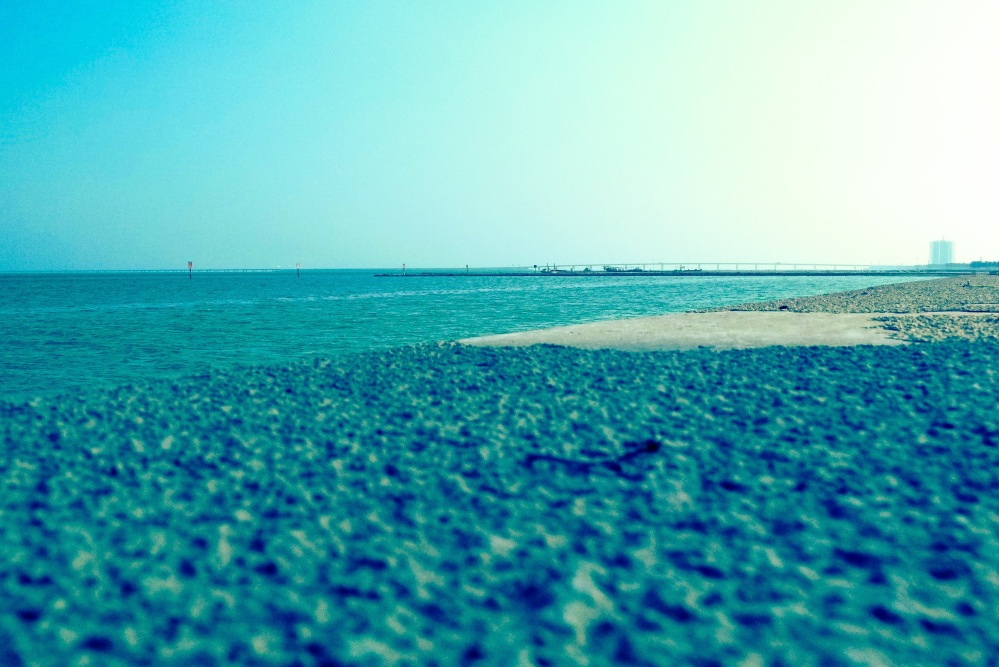 This explains why after spending long hours at the beach, we feel more alert, relaxed, and energized. So never forget to spend some time with the beach when there is a chance.

At 5:00 PM, we cruised our way down to the famous Bahrain border to realize the highlight of this weekend getaway. At long last, we glided over the long bridge connecting Saudi and Bahrain, called Dammam Bahrain Causeway (also known as King Fahd Causeway). We only caught a glimpse of the bridge the last time we visited the Eastern Region (“Urban Spelunking: Nigh and Day“). But at that moment, we were already feeling Saudi’s most historic and historical bridge.

I have read that the building of the causeway began in 1968 and the bridge was completed and opened to the public in 1986. This causeway not only connects Saudi and Bahrain to business links but it also allows travelers based in Dammam and Al Khobar to explore the area. It should be noted that the causeway is just 20 minutes away from visitors in Al Khobar so let us just say we had to take advantage of the convenient access to Bahrain.

The next afternoon, we had to head back home, but not before taking a little scenic drive of the area of course.

Once again, we felt so blessed to have been osculated by the gentle sea breeze, hugged by the swaying palm trees, regaled by the sparkling ocean views, and mesmerized by the massive pieces of architecture in the Eastern part of the Kingdom and Bahrain’s much-publicized threshold.  From here on out, we would be able to effortlessly define pleasure and relaxation with this kind of break.

Saudi to Bahrain: Causeway Bridge to Bahrain at paolobiyahero.wordpress.com

The Intriguing Border Crossings Of Saudi Arabia at destinationksa.com

My First Water From Arab Country at paolobiyahero.wordpress.com

Glimpse Over Dammam City at paolobiyahero.wordpress.com