Caveat: The purpose of this series is neither to proclaim myself as a grammarian nor to despise people who are still unfamiliar with common grammar mistakes. It is to serve as a reminder that there are rules in English that refute those mistakes. I am well aware that I still have a lot to learn in English and I will not stop digging those rules to share them here. If you happen to be a guilty party, please remember that I shared these blog posts in the spirit of constructive criticism.

For the past few months, I have been mingling with different Filipino communities here in the capital city of Saudi Arabia, which paved the way for me to identify another set of grammar pet peeves. Let me make it clear that these pet peeves are actually under the umbrella of Taglish. For our foreign readers out there, Taglish is a category of Philippine language that is mixed with Tagalog and English. It is used primarily by us, Filipinos, by mixing Tagalog words up with English words or sentences. 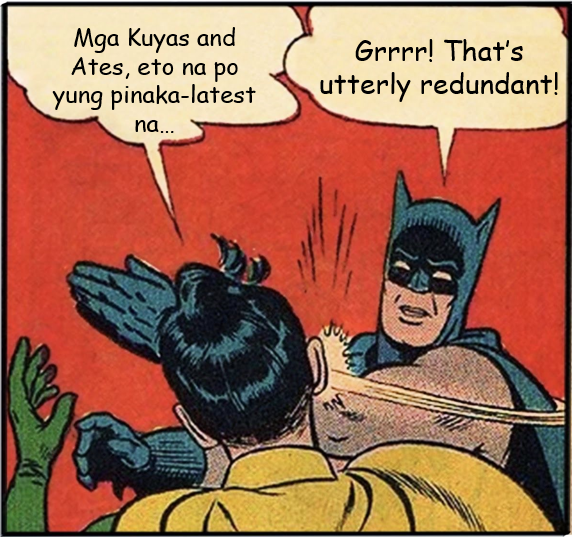 Please note that when we include pet peeves in the list, it means they are considerably common. Before gnashing your teeth, guilty party, let me remind you that this is not a matter of personal hate campaign. It is just sharing what is correct in the now era of compromised language beauty. If you are guilty of these pet peeves, just charge it to your lack of curiosity about language and its proper construction. Besides, all of us have committed grammar mistakes one way or another.

First, the Philippine Style Guide prohibits the adding of s to pluralize Filipino words because it is not grammatically correct. You can find the details here: The Presidential Communications Development and Strategic Planning Office(PCDSPO) Style Guide: XVII. Filipino Terms.

One thing that we, Filipinos, have forgotten is that when we use the word mga followed by a noun (e.g., mga kuya or mga bagay), the concept of pluralization is already met. Or, just use the English equivalents of those Filipino words.

Yes, language is evolving but that does not mean outright grammar mistakes like this are excused, even in Filipino.

Second, pinaka-latest is definitely redundant because its exact translation is “most latest’.  “Latest” is already in its superlative degree, meaning there is nothing “later” than it.

A cautionary advice, drop pinaka and just say “latest” or pinakabago (the exact translation in Filipino). Local journalists themselves on TV, news, and radio are using the word pinaka-latest unconsciously. That does not mean it is correct.

On the other side of the coin, one very common mistake committed in English is mispronouncing the word pronunciation as pronounciation (pruh–noun-see-ey-shuh n). My English instructors back in college adore the word. The problem is, they were mispronouncing it. I hope that is no longer the case now.

You can hear pronunciation being pronounced, by analogy with pronounce, as if the second syllable rhymed with bounce. This explains why the word pronounciation surfaces in google search box like it is an existing word. Fortunately, dictionaries renounce the existence of such.

Standard English recommends pruh-nuhn-see-ey-shuh n as the standard pronunciation of the subject word. The second syllable should sound exactly as the word nun–not noun. And, the correct spelling is pronunciation.

I did ask the super modern dossier, Google, about why the spelling of the word became pronunciation instead of its most commonly considered version, . Trisyllabic laxing holds the answers. In Middle and Old Englishes, tense vowels became lax before two syllables. That is why /aʊ/  (or any other pre-great vowel shift vowels), for the digraph < ou >, became /ʌ/. This pronunciation subsequently forced the change in spelling to < u >.

In this day and age, it pays to know that misspelling is no longer a big deal. Mispronunciation is.

That is all for this episode and I hope you learned something. Feel free to share your favorite grammar pet peeves, especially the ones that are not yet on the list.

Words you’ve been taught are Filipinisms but are actually not (linkedin.com)

What are your biggest grammar pet peeves? (poynter.org)