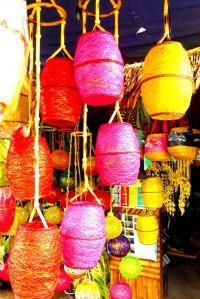 It all started when I saw my son playing blissfully with the slippery earth, the warm-season cogon grass, and the almost piercing golden rays of the sun three years ago. That’s when I figured out he is bound to appreciate nature’s simple wonders just as I do. I have long understood how important it is to cohere with nature, to be united with her in many ways—be it hugging her humongous trees, climbing her mighty sierra rising as high as the clouds, gamboling with her boundless and reticent waters, or feasting my eyes on the withering bloom of her brome grass and the budding fungi inside a decaying bamboo pole. I want to impart the same to my little boy, Brad, as early as possible. He appreciates those in like manner.

It is for this reason that I surrendered his feet to hiking when he was two years old at the panoramic cemented trail of Lignon Hill. I vividly remember how fervid he was trekking his way up the concrete pavement straight to the hilltop. The boastful shout of how strong and brave he was for winning my challenge still clearly resonates with me.

So when I had my vacation last March to April this year, I decided to relive his, I may say, defining moment as a potential hiker—when Brad initiated the idea of spending time together. The two of us.

We were busy playing at the lawn one time when he abruptly asked when we are going to travel again. To be honest, I totally forgot about it because of financial constraints by then. It is not something I should ignore though. I would not want to rabbet his young and fragile heart so I instantly replied, “Tomorrow.” The Bicol Region has a lot of tourist spots and I am certain that we can have a decent, economical destination anyway with the countable coins in my pocket.

It was there that our wandering feet osculated the fiery terra firma of Kawa-Kawa Hill’s Nature Park in Ligao City, Albay.

Before we got to the hill’s “jump-off point”, the little boy complained that his feet have petered out the moment we started walking from the hill’s threshold (or 1.5 km away from Maharlika highway) and that he’s already dead thirsty. We did npt take a trike ride to get there so a four-year old has all the reasons to blurt those out. I then thought he got to be pushed for the second leg of of this cyclopean task because the cauldron is a 236 meter land form.

First bait: I let him choose between a bottle of water and a can of soda. (He chose the former.) Second bait: I brought him to the souvenir stores to let him pick what he wants. (He immediately pointed the little guitar opposite him.) Last bait: I did the motivating-a-tired-kid modus, which I expected to take long. (I was happy it didn’t.)

In the middle of telling him what’s in store at the hilltop, he rose from sitting and enthusiastically said, “Common, Papa, let’s go see what’s up there.” Then our second journey for another set of a thousand steps began.

One of the many things I love about him is when he verbalizes how he feels towards nature’s breathing and non-breathing ornaments scattered around a place. I cannot help but relish every line of his propelling music while treading our way up.

What a blue sky

Wow! That tree is so tall

It is such a beauty

Look…and the colorful insect there

After a hundred steps, Brad demanded a rest, and giving in to it was the only choice. While gulping down the colorless liquid to quench his thirst, he enthused, “How long will it take for us to get to the hilltop?” To which I replied, “25 to 30 min. Don’t worry about it, buddy. To walk that long is very good for the health. You want to become stronger, right? This activity will help you.” I was all happy because “Yes.” and “Okay!” were the last words I heard from him until we hit the peak. That is approximately after 30 minutes.

Are we there yet?

Let’s rest for while

Oh, I want to touch that sunflower

I wanna run there

I had never truly perceived why the place is called “kawa-kawa” until I gazed around at that platform and studied the geological formation of the summit, or in this case, hilltop. What can be seen thereon is a caldera measuring up to six hectare. However, caldera is not technically correct as this land form is not a volcano. Hence, the name was eventually derived from the shape of a cauldron (kawa in Tagalog) instead. The credit goes to the flocking tourists who were actually the ones responsible for naming the place.

One of the many things I learned from mountain climbing is, the best cycloramas are seen atop the summit. The same goes for this endeavor I must say. The superlative degree of your appreciation for this trotter attraction will only come out once you get to see the lay of the land up there.

The place may seem to be run-of-the-mill but that perspective will sure change once you get to the top. The delectable view of Mt. Mayon and Mt. Masaraga domineeringly standing in the distance, the energizing fresh air, the tranquil surroundings to refresh thy minds, the breathtaking view of the city and its nearby towns, the extending green fields and mountains, the flower plantation and motley orchard quietly squatting on the slopes are only some of what it can bestow upon your eyes. 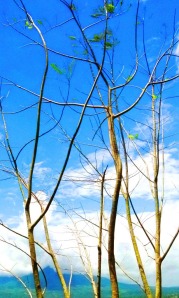 Wow, it’s so cool up here

I no longer feel tired, Papa

(Then the sun came out from the clouds…)

Uh-oh! The heat is going to pierce our skin again and again

But, thanks to the Aura up there

I could not be any prouder for bringing Brad into this place. After hearing those sweet lyrics on our way up, I can conclude that he learned something, more so enjoyed the long distance marching. And that he recognized this day as another reason to slaver for more adventures, life-changing experiences, and travels. The peculiar joy that radiated from his face as we were ascending and descending could not be mistaken for something else.

At this juncture, nothing seemed better and more encouraging than hearing my young boy speaks about his admiration for how bright and beautiful things are—which led me to thinking that probably, the reason why the poem “All Things Bright and Beautiful” is being taught and recited during grade school is because kids appreciate the things around them most when they are bright and beautiful. Lame as it may sound but I am sure, by the time he steps out of preschool and come across that poem, he will ace its recitation.

As a reward for his indubitable penchant for the endeavor I dearly love, I will already be introducing him to the first mountain I summited next year.